Hollywood’s finest came out in droves for a pre-Golden Globes event which saw them mingling with Olympians — and the get-together was nothing short of a tearjerker.

The ritzy shindig went down Saturday afternoon at one of the first-ever homes established in Bev Hills … the Virginia Robinson Gardens mansion. It’s called Gold Meets Golden, and the whole idea is to pair celebs with pro athletes all in the name of charity —  this in anticipation of Sunday’s award show and the 2020 Tokyo Olympics, of course.

For this 7th year — which was hosted/presented by Coca Cola, BMW Beverly Hills, FASHWIRE along with other sponsors — the proceeds were going toward Angel City Sports … an org promoting adaptive sports for kids, adults and vets with physical disabilities. 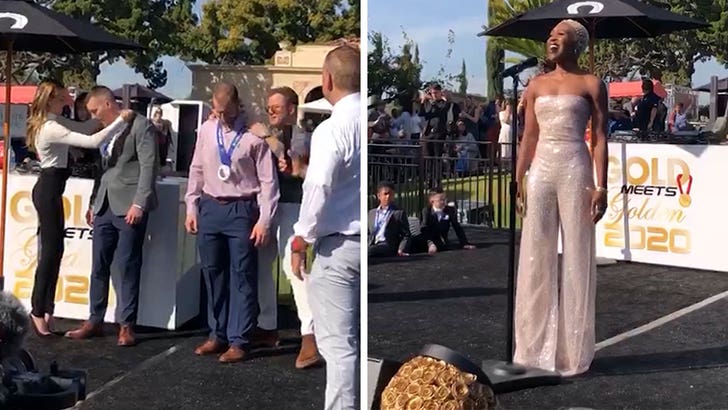 Definitely a cause worth getting behind … and you could tell as much by who showed up — including Nicole Kidman, Chris Evans, Rami Malek, Taron Egerton, Cynthia Erivo, Matt Bomer, Ben Platt, Beanie Feldstein, Zooey Deutch, Joey King, Naomi Watts, Lou Ferringo and more.

Check out the clip above … you see Cynthia belting out a rendition of John Lennon’s “Imagine,” Taron and Sistine Stallone putting medals on the 2014 bobsled team and Matt Bomer presenting a cake to diver Greg Louganis for his 60th bday this month.

We’re told there wasn’t a dry eye throughout Saturday’s proceedings — and by the looks of all this … we can see why. Pretty heartwarming stuff here 💖