“He let go because I screamed,” says the 6-year-old victim, who was taking out the trash at the time.

A 6-year-old from Ohio narrowly escaped an alleged kidnapping attempt in her own front yard — and the whole thing was caught on her family’s Ring camera.

Ken’Adi Nash was taking out the trash when a man, later identified as 33-year-old Deric McPherson, allegedly grabbed and groped her, before he tried pulling her to go with him away from the home.

In the video (below), she can be heard letting out a big scream, before the suspect let her go and casually walked off.

“She came in with a blood-curling scream, she ran into the living room she said, ‘Mommy someone tried to take me, he touched my private parts,'” the girl’s mother, Mandie, told CNN. “I went outside and saw him walking down the sidewalk.”

Mandie said both parents chased after the man on foot, before Ricky hopped into his car and cornered McPherson in a parking lot while contacting police. “I chased him like he still had my kid. I definitely didn’t want him to be able to go snatch another kid,” said Ricky.

McPherson was arrested and — per the Butler County Clerk of Courts records — has been charged with kidnapping, gross sexual imposition and unlawful restraint. He’s being held on a $35,000 bond.

The girl’s mother said they’re already seeking counseling for her and are considering moving, at Ken’Adi’s request.

Mandie added they’re “so proud” of how their daughter handled herself during the terrifying incident. 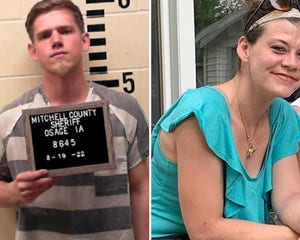 In An Instagram Post, Eugenio Derbez’s Wife Stated That Although The Actor Is Healthy, His Wounds Are Severe

In An Instagram Post, Eugenio Derbez's Wife Stated That Although The Actor Is Healthy, His Wounds Are Severe

Camila Morrone Steps Out in Malibu After Leonardo DiCaprio Split