From His First Love to Kim Kardashian

“I’ve learned a lot from the awesome chicks that I’ve been with.”

There’s no doubt that Pete Davidson has become one of the most eligible bachelors in Hollywood and a hot commodity in the celebrity dating world! Over the past few years, Pete has romanced quite a few “beautiful, cool, and talented” women…and made a lot of headlines along the way. Although he’s faced some ups and downs in his romantic life, he says he always walks away from relationships a better person than when he started.

“I’ve learned a lot from the awesome chicks that I’ve been with and they’re all cool. You just grow and become a better version of yourself because you learn a little something from everybody,” Pete once said.

In 2015, Pete reportedly dated “Girl Code” star Carly Aquilino. While not much is known about their relationship, the duo appeared to remain friends after their split and Carly even co-starred in Pete’s 2020 film, “The King of Staten Island.”

The following year, Pete began dating Larry David’s daughter Cazzie. The pair were together for over two years, during which Pete had a difficult time dealing with his mental health. Cazzie reflected on their struggles in her book of essays, “No One Asked For This,” explaining that at first, the pair were “kindred spirits.” Unfortunately, Pete’s mental health issues eventually left her “too mentally exhausted to do anything besides emotionally recover from the chaos of the week before.”

In 2018, the couple called things off, with Cazzie doing the “exceptionally hard task” of ending things while away on a family trip. When Cazzie called Pete a few days later to reconcile, he told her he was the “happiest he had ever been” and wanted to continue their time apart. Days later, Cazzie found out with the rest of the world that Pete had moved on.

12 Famous Men Who Have Gotten Real About Mental Health

Just weeks into dating, Pete covered up tattoos dedicated to his Cazzie and got new matching tattoos with Ariana. By mid-May, it was confirmed that Pete and Ariana were officially dating and by the end of the month, Pete was getting an engagement ring commissioned. The couple made things Instagram official on May 30, and just days later, Pete proposed. Soon after, the two moved into a $16 million loft together and adopted a pet pig.

In September, the duo decided to take a step back from the spotlight following the passing of Ariana’s ex-boyfriend Mac Miller. From there, things seemed to take a downward turn for the couple who mutually decided to end their engagement in early October. Ariana later said the relationship had simply been “an amazing distraction” after her split from Mac.

“It was frivolous and fun and insane and highly unrealistic, and I loved him, and I didn’t know him. I’m like an infant when it comes to real life and this old soul, been-around-the-block-a-million-times artist. I still don’t trust myself with the life stuff,” Ariana told Vogue. 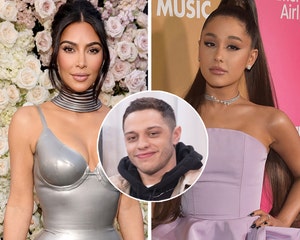 In January 2019, Pete and Kate Beckinsale sparked dating rumors when they were spotted flirting at a Golden Globes afterparty. Not long after, paparazzi photos of the couple began to surface where they could be seen holding hands and spending more time together. In March, Kate and Pete were photographed kissing at a hockey game, and later that month, Pete met Kate’s parents.

“I’ve never been in this position before—never dated anybody who comes with their own bag of mischief. It’s all quite shocking, and something to get used to. I think if you liked the person less, you would bow out of it. If that were the main thrust of the relationship, there would be a problem. But it’s not” Kate said of the relationship.

Unfortunately, the relationship didn’t last much longer, and by April, things had fizzled out. 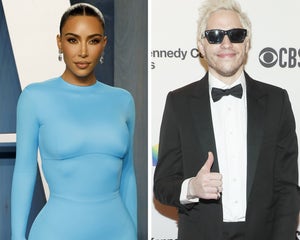 In August 2019, Pete was spotted with Margaret Qualley for the first time while in Italy for the premiere of her film, “Seberg.” Although they never confirmed their relationship, Margaret’s mother Andie MacDowell did comment about the duo.

Shortly after his split from Margaret, Pete began dating Kaia Gerber in October of 2019.​​ Over the course of the next two months, the couple was spotted spending time together in New York City, Los Angeles and even on a getaway to Miami. Unfortunately, things started to take a turn at the end of the year when there were reports that Kaia’s parents were attempting to help Pete through a tough time. The couple split a short time later and looking back, Pete said he didn’t want Kaia to have to deal with everything he was going through.

“She’s very young, and I’m f—ing going through a lot and it was before I went to rehab. It’s just like, she should be having fun. She shouldn’t have to worry about some dude that just has issues and s—. She should be enjoying her work. It just wasn’t the right place or the right time at all,” Pete said in an interview with Charlamagne Tha God. 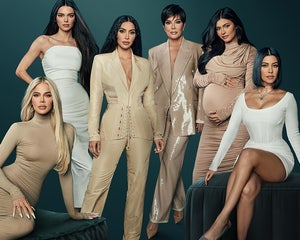 After taking a break from dating, rumors began swirling that Pete had hit it off with “Bridgerton” star Phoebe Dynevor in early 2021. The duo reportedly met while Phoebe was visiting New York for work, and not long after, fans began spotting the pair hanging out not far from Phoebe’s hometown in England.

By April, news outlets were confirming the couple’s relationship — and they were even seen wearing matching necklaces that featured gold charms of each other’s initials. Later that month, Pete seemingly confirmed the relationship himself when he told students at Marquette University that he was “with [his] celebrity crush” during a Zoom Q&A session. Later that month, he jetted to England to help celebrate Phoebe’s 26th birthday. The two kept things going strong while eating long distance and in July, they made their first public appearance at Wimbledon.

Unfortunately, by August, reports surfaced that the couple had quietly gone their separate ways. With Phoebe busy filming “Bridgerton” in the UK and Pete committed to “Saturday Night Live” and other filming projects, long-distance was reportedly too taxing on the pair. 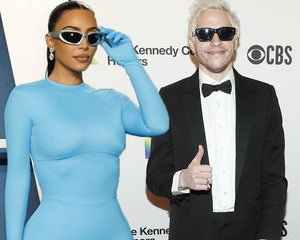 In October, Pete connected with Kim Kardashian when she hosted “Saturday Night Live.” The duo even shared a kiss during the taping and, although it was strictly professional at the time, it seemed to have sparked something between the two. Over the course of the next few months, Kim and Pete were spotted spending time with one another — everywhere from Pete’s hometown of Staten Island to hanging out with Flava Flav.

By January, things were heating up between the couple, who reportedly jetted to the Bahamas for a romantic getaway. The following month, Pete publicly called Kim his girlfriend for the first time and just a few weeks after that, they made things Instagram official.

The pair went on to become much more public about their relationship, and Pete was even introduced to Kim’s children.

However, in August, it was confirmed that Pete and Kim had split after nine months together, according to TMZ. Per E! News, who broke the news, said the two made the decision to be just friends. Sources told the outlet that Pete and Kim have “a lot of love and respect for each other,” but their busy schedules and being away from one another “made it really difficult to maintain a relationship.”

As reported by TMZ back in June, Pete has been filming the movie “Wizards!” in Australia, and Kim even visited him last month.

Meanwhile, Kim has been balancing work and motherhood duties as she jets around the world, while also raising her four kids, whom she shares with her estranged husband Kanye West — North, 9, Saint, 6, Chicago, 4, and Psalm, 3, — back at home in Los Angeles.

Frankie Jonas Reveals Which Brother Is the Secret “Party Guy”

Everything To Know About Ashley Manning – Hollywood Life