The suspect’s mother, however, said the victim “caused that to happen.”

20-year-old Michael Morgan has been charged with attempted murder and criminal possession of a weapon after he allegedly shot a McDonald’s employee in Brooklyn over some cold french fries, per police.

According to WABC, 23-year-old Matthew Webb got into an argument with a 40-year-old female customer who complained her fries were cold. The disagreement escalated and she is said to have called her son, who then showed up at the establishment to confront Webb. Per CBS, the mother told her son to “take care of the problem.”

When Morgan arrived, police say he pulled out a handgun and shot Webb in the neck. The victim was rushed to Brookdale University Hospital.

Michael Morgan, 20, has been charged with attempted murder and criminal possession of a weapon for the shooting of a McDonald’s worker in Brooklyn.

As @NYPDDetectives remain dedicated to providing justice, they need your help. If you have information on crimes, call #800577TIPS. pic.twitter.com/fLBdk1RSYV

Morgan was taken into custody at the scene, with the NYPD releasing his name and charges against him on Wednesday morning. According to CBS News, Webb remains hospitalized with critical injuries.

The suspect’s mother, Lisa Fulmore, detailed her side of the story while speaking with the New York Post — confirming that the altercation was sparked by cold fries. Fulmore claimed that she first asked a woman behind the counter to get her a fresh batch — only to realize the employee had only put a few hot ones on top of what had already been given to her.

Fulmore then claimed Webb told her she had food in her teeth, before she was told the manager had stepped out. “This is when I was on the phone with my son. I was like, ‘They in this McDonald’s playing with me,'” she continued, saying he was just down the block and showed up to confront the employees.

“My son said, ‘Come outside’ to the boy in the back,'” she continued, referring to Webb. Fulmore claimed her son left after that, but about 10-15 minutes later Webb “went looking for my son.” She added, “The next thing you know, maybe like 10 minutes later, you hear a gunshot.”

“I looked, and I seen a boy on the ground, and then I saw my son running the other way. I called 911, and then I sat there and waited,” she said, adding that she still doesn’t “even know if my son did that.” Fulmore also put the blame on the victim, saying, “There was no reason for him to go outside looking for somebody. Whatever happened outside, you caused that to happen.” 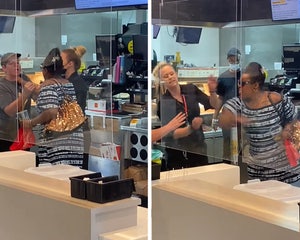 Rakul Preet Singh was clicked in casuals earlier in the city